Defining Respect for the Next Generation

Each year, the Arnold & Itkin Foundation invites students from Houston Area Elementary schools to participate in our RESPECT Contest. Students are asked to define the word “respect” in two sentences or less, and draw a picture to complement their explanation. The Arnold & Itkin Foundation reviews every entry, and the winning students receive a donation to their school, a contribution to the charity of their choice, and a cash prize for themselves.

We think respect and justice go hand in hand. We started this project hoping to teach kids something about how to treat others, but it turns out, they taught us to have a broader definition of justice, and that has influenced our mission at the Arnold & Itkin Foundation. Jason Itkin

The charities selected by these students include:

We hope this program will help inspire our future leaders and citizens to think about what justice looks like on an everyday basis, and how each of us can contribute to securing it for our neighbors.

We hosted the 3rd Annual Respect Contest awards ceremony on November 8, 2018 at the Harris County Civil Courthouse. We chose three winners from each school district who were awarded a cash prize for themselves, a donation to their school, and a donation to a charity of their choice.

The chosen charities were:

Matching donations were also made to De Zavala Middle School, Bobby Shaw Middle School, San Jacinto Elementary, Dabbs Elementary, Havard Elementary, Woodland Acres Elementary, and Bayshore Elementary. We were honored to have these students share their thoughts with us and are proud to support them, their schools and the various charities chosen. Congratulations to all of the winners!

On November 14, 2019, we hosted the 4th Annual Respect Contest at the Harris County Civil Courthouse. Like the previous years, we invited 5th grade students from local school districts to come and explain what respect means to them.

The charities chosen from this year's winners include the following:

In November 2020, the Arnold & Itkin Foundation virtually hosted its 5th Annual RESPECT Contest. The challenges of 2020 made the underlying goals of the RESPECT contest more important than ever—even if it was virtual.

The charities the kids picked this year included: 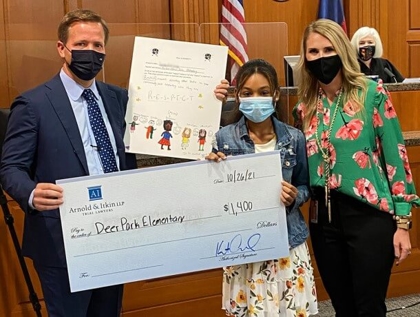 For the sixth year in a row, the Arnold & Itkin Foundation hosted the RESPECT Contest. In 2021, the foundation gave out $24,000 in prizes to schools, charities, and students. The charities the kids picked this year included:

Though we hosted it online in 2020, we were thrilled to host the RESPECT Contest in person in 2021.

In October 2022, the Arnold & Itkin Foundation hosted the 7th annual RESPECT Contest. We gave $21,600 in prize money in total to our winners, their schools, and the charity of their choice. We had another great batch of entries, with 12 winners from the Galena Park, Pasadena, La Porte, and Deer Park school districts.

The winning charities this year were:

Reading every submission and sending donations to the organizations in each child’s name was an honor.